While this big secret is going to help you massively with teaching your pupils, I’m not going to be specifically telling you it. You’re going to find out the secret for yourself.

It’s something that will help your training massively and you will suddenly understand how to teach so many things you did not know possible. 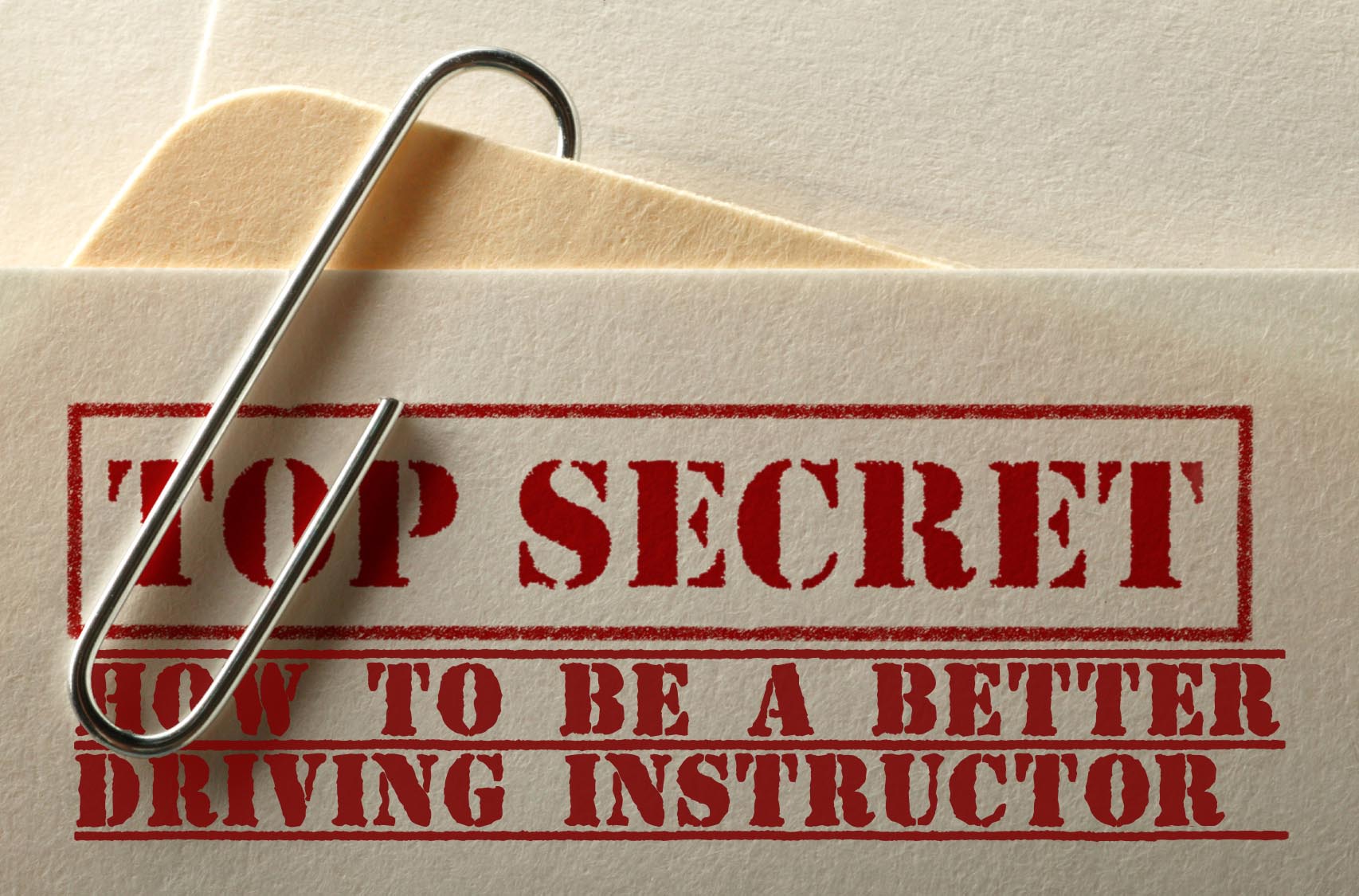 Let me give you of some context as to where this secret comes from. Before founding my own school, I was a full-time employed instructor trainer for many years. Before that, I was an instructor trainer for the AA and later I became Director of Training for a medium-sized driving school. Suffice to say, I have trained hundreds.

…when it came to teaching ANYTHING, I would be met with “how do I teach that?”

Back then I was rescuing many instructors who had failed multiple attempts at the part 3 test. Since those days, I’ve taken many professional qualifications and used my background to help with my master’s degree in Driver Training Education. This is my specialist subject.

Teaching people to drive isn’t rocket science – and neither is passing the part 3 test. Much of the time, trainees simply fail to look in the right place and I’ve spoken about that many times before. But today I am talking about another secret. The secret many trainers will not tell you.

But why would trainers not give out this big secret? Is it because they don’t understand it themselves? Maybe. Is it because they find it easier to just not teach this? Maybe. But it’s something I see time and time again and one of the most unanswered questions on any social media platform.

So, I’ll give you an insight into how many of my successful trainees discovered this.

Come on, Dave. Tell us the big secret

Back in my part 3 rescue days, every single time I met a trainee I’d ask them to teach me the same subject, emerging from junctions.

Now, apart from the fact that almost no trainees actually started teaching from the off (rather they would let me mess up first), the secret was that when it came to teaching ANYTHING, I would be met with “how do I teach that?” My reply was always, “well, what do you do?” This of course would be met with something like “I just do it” or’ “I just know.”

And therein lies the big secret.

The secret on how to teach absolutely any subject lies inside you, but you first have to completely analyse what YOU DO. This secret works with anything from steering and parking to mirrors. It may seem very difficult at first (if not impossible) but when you unlock the secret on how YOU do anything, you have your answer. Let me elaborate…

This big secret unlocks the key to teaching – and solving problems for yourself. You won’t need to ask that ADI Facebook group “how do I teach the bay park?” or “how do I get the pupil to stay away from parked cars?” Let’s face it, you’ll probably get a hundred different answers in the comments anyway and you’ll be none the wiser.

One of the methods I used to use was to ask a trainee to write down the steps to make a cup of coffee.  Now this sounds like a simple task at first, but it always goes the same way. I would then try to follow the trainee’s instructions.

This would always throw up the same scenarios:

However, here is the point of this exercise…

I’d always ask them to do it again once I had picked holes in their methodology and almost every time it would be perfect. They had learned how to extract the information hidden inside them.

The same goes for absolutely every single thing you teach.

You’ll need to refine everything of course but when you start doing this, amazingly you’ll experience the ability to teach better. We used to do the cup of coffee exercise with The Instructor College, but they missed the important second stage where you show the trainee how much better they can get it when they understand the detail required. They used to stop the exercise after the first attempt leaving the trainee feeling very silly. But then, that’s how many trainers used to train. You have a go, get it wrong, look stupid and next week you look stupid doing a completely new subject. Things have moved on since then (for most trainers).

So, why not just use everyone else’s system?

Many times I’d be told that to get a learner to turn at the right point you have to make them line the ‘T’ up from the white lines level with the door mirror.

Back in the old days, the examiner would role-play the scenario and the trainee would find the examiner couldn’t do this. I’d ask the trainee, “do you use this method when driving?” no, of course they didn’t! And had they tried it themselves? No! So I would get them to give it a try, and guess what? They couldn’t do it that way either.

This takes us back to the big secret – what do you do?

Rinse and repeat. There are loads of examples out there. But remember, not everyone learns the same way. It’s good to have other ways, but not the stock “my trainer told me to do this.” I suppose a better question on any Facebook group would be, what do other instructors actually do when driving themselves?

Do I use reference points when teaching?

Well yes, I do sometimes because I use them when actually driving. But I know that every pupil is different so I encourage them to find their own reference, guiding them to where they might be found.

I’ve also found that pupils give me new ways they teach things and I’ve taken them on board. If it works, it works. I use what I do as a starting point and build and adapt with the pupil.

Coaching and ‘what I do’

This doesn’t mean you must tell every pupil to do what you do, far from it. But pupils will require help and this is where your knowledge comes in. If you know the precise steps to make something work, then you’re 90% of the way there to helping the pupil.

Remember, not everyone learns the same way. It’s good to have other ways [of teaching]

If you find the correct position in the road by looking far into the distance and lining up behind a car that you can see is in the correct position, you could ask a pupil who was struggling, “where are you looking?” or “what do you think of the car in front’s position?” (This is just an example of course, I’m not going to tell you what to do 😉).

So how does your part two fit in?

During your part two test (and even before that in your own practical driving test), you drove a perfect or near-perfect drive. You did that your way – and it worked!

Part three is about transferring that skill to your pupils. Why give them Fred from Twitter’s way, or Wendy’s from Facebook? (Fred and Wendy are fictitious names used for the writing of this article and have no bearing on anyone who could be called Fred or Wendy).

Use your system and methods, the way you did your part two as a basis. It might feel harder than asking someone else, but the results are better and once you find one way, you discover how to do all the other things. You’ll even be able to teach subjects you know about apart from driving.

The truth is that it’s not easy at first

At first it might seem difficult but ultimately this secret will open up new ideas and you’ll realise you did have the knowledge inside you all along. That’s what true coaching is, bringing out the knowledge and skills that already exist within.

2 thoughts on “The biggest secret to improving your teaching”